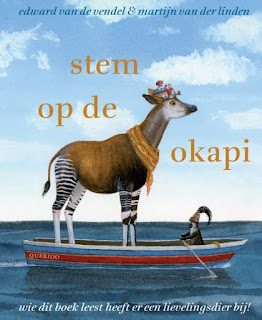 For years it has been my favourite animal: the okapi. This animal that is shy and majestic at the same time, that was discovered only 100 years ago (in Congo), and that bears zebrastripes as well as horns - since it's the only actual familymember of the giraffe.
In this fullcolour book, that illustrator Martijn van der Linden and me have been working on for years, we present 88 reasons to take the okapi as your new preferred animal. The book has nine chapters, and each chapter is different. In the first one we describe the okapi from head to toe, in another one we follow an okapi-zookeeper for some (dramatic) years, there are chapters with just okapi-illustrations, there is one with 4 okapi-poems, there is the okapi museum, in which we collect okapi-pictures (made by many leading illustrators, especially for this book).
It's a book full of passion, it's a book that provides you with everything that there is to know about the okapi, it's funny and light, it's serious and informative, we hope we have convinced you at the end to keep an eye on the shy and majestic animals ánd people around us...