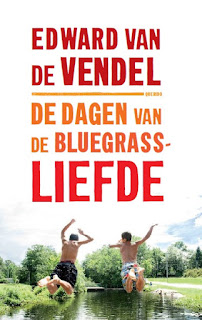 My first young adult novel, and still in print! It's an intense lovestory - between Tycho (18) from Holland and Oliver (18) from Norway. They meet in a youth camp in the USA and fall in love. The book is all about experiencing your first life-changing love-affair (in this case: between two boys), and trying to find your way in this new reality.

- The Dutch Translation Fund made a special on this book - here.
- A proof translation in English is available.
- There were two German editions. First it was published under the title SPRING WENN DU DICH TRAUST, later it was re-issued as DIE TAGE DER BLUEGRASSLIEBE.
- In 2006 I wrote a folllow-up to this book, ONS DERDE LICHAAM, and in 2015 a prequel was published, OLIVER.