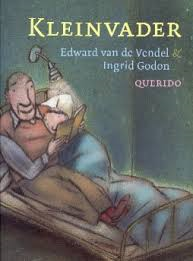 
In this second picture book with Ingrid Godon it's all about the grandson that talks about his fantastic grandfather - who isn't mere the father of his father, but also the father of the foxes and the chicken, of the forest, of the country! But when he gets sad and silent because of his memories about grandma, grandfather needs his grandson. His little-father.


- A proof translation in English is available.